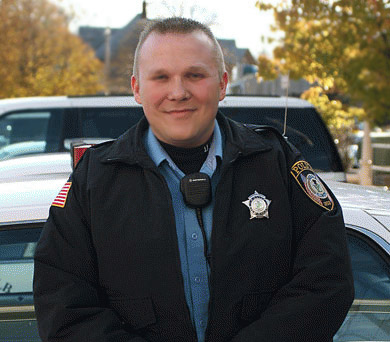 Police Officer Injured in the Line of Duty

Police Officer Dale Diedrich and another officer attempted to subdue an intoxicated arrestee in the booking room of the DeKalb Police Department. The suspect had just taken a swing at one of the officers. While struggling to control the suspect, both the officers and the suspect went to the floor. As all three of them impacted the booking room floor, Officer Diedrich struck his head, which resulted in a brief loss of consciousness.

The next thing Officer Diedrich remembered was lying on the booking room floor, both Officers had holds on the suspect to control him and the fight was over. At that time Officer Diedrich looked up and there was another Police Officer standing over him who had not been in the booking room when the struggle began. Within hours, Diedrich’s brain swelled causing nausea and vomiting that landed him in the emergency room.

Before that injury in the line of duty on December 7, 2008, Diedrich knew very little about traumatic brain injury and the need for Meyers & Flowers, a Chicago law firm specializing in representing public service workers’ compensation cases. A recommendation by a municipal attorney led him to Attorney Ryan Theriault of Meyers & Flowers. Meyers & Flowers has a dedicated team of attorneys, medical consultants and legal assistants experienced in protecting police officers injured in the line of duty. Theriault previously worked with a suburban Chicago police department for nearly a decade. Theriault and his team at Meyers & Flowers had the expertise that would lead Diedrich through a life-changing injury and a tough workers’ compensation case.

In the days after the incident, Diedrich’s speech was incomprehensible. He had double vision with one eye seeing 90 degrees counter clockwise. His balance was off. And his short-term memory failed causing him to constantly repeat himself. After almost two years of varying types of medication to assist with the mild traumatic brain injury, it became clear that life was going to be different.

He returned to light duty at the police station. Unfortunately, he lacked concentration and had trouble just trying to file reports. At that point, he returned to the neurologist and sought help from Attorney Peter Flowers and Theriault of Meyers and Flowers. After a year of workers’ compensation on full salary, Diedrich was in the predicament of possibly being terminated, facing decreased salary, which threatened maintaining the quality of life for his family.

“Pete and Ryan instilled us with confidence,” Diedrich said. “The Meyers & Flowers law firm team had a familiarity with law enforcement and traumatic brain injury resources that were valuable. Even some of the local doctors were not aware of the post-concussive rehabilitation facility that Meyers & Flowers referred me to. That care and therapy changed my day-to-day life. ”

At Marianjoy’s Brain Injury Hospital, an interdisciplinary team retrained Diedrich’s memory, speech patterns and vestibular system. Targeted neuro-rehabilitation therapy improved dexterity in his hands, his balance and taught him how to compensate for neuro-cognitive deficits.

“I feel more confident and coordinated now going out into the world again,” Diedrich said. “Yet with three days a week, three hours a day of continuous therapy, we would have gone bankrupt, if that was out of pocket. With knowledge of the law and the sections within it, Ryan and the whole team at Meyers & Flowers law firm gave me peace of mind, instead of worrying about medical bills and financial stability.”

Though Diedrich improved, he realized that returning to the duty was not a reality. He would have to retire from the police force. Attorney Theriault, of the Meyers & Flowers law firm, represented Diedrich in his workers’ comp case and a hearing before the pension board.

“It went from a workers’ comp case to a disability, pension and retirement case,” Diedrich said. “With Ryan’s family being in law enforcement, he understood the language, what I was saying and what I needed. My wife said Ryan was a pit bull for us. As I had to deal with my healthcare, it was good to know Ryan and the whole Meyers & Flowers team was looking out for my family as a whole. They knew the ins and outs of workers’ comp, personal injury, disability, pension, retirement and what the law laid out for police officers injured in the line of duty, which included receiving health care for the rest of my life.”

Today, Diedrich continues therapy and works toward accepting his new normal of retirement from the police force at age 42. With the settlement, Diedrich was able to stay in his home and preserve the quality of life for his two children and wife. He tries to stay positive and always keeps business cards for Meyers & Flowers in his wallet in case anyone in the public safety community is in need of legal advice.

“I don’t know where we would be today without Meyers and Flowers,” Diedrich said. “Since our case resolved in 2010 and I retired, we have never received collection calls or had any problems. Meyers & Flowers was very effective, exceeding our expectations with the settlement while ensuring I had open continuous medical care for my injury and health insurance with my retirement.”

The outcome of Diedrich’s case surpassed anything he and his wife had ever expected, which allowed them to focus on the rebuilding of their lives after his injury.